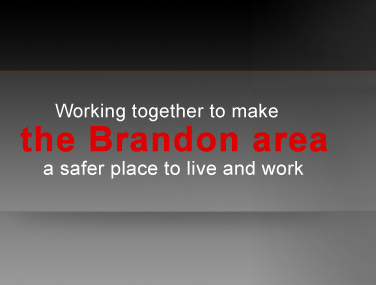 Who are Brandon Crime Stoppers?

The three main groups involved to organize Crime Stoppers are the police, the community and the media.

At the monthly Board meeting the Police Coordinator relays the activities carried out by Crime Stoppers and provides statistics to the Board obtained from the TIPS received each month. In addition to providing statistics to the Board Crimestoppers Head Office in Ontario. The Brandon Chamber of Commerce and the City of Brandon Coordinators also receive statistics for dissemination to our local media.The Police Coordinator liaises with all members of the department, and other police agencies, as not all crimes can be a subject of television re-enactment. However, often crimes are often aired on local stations, as well as have them printed in every newspaper in Manitoba, if necessary.  An important function of the Police Coordinator is to liaison with media personnel.

In Brandon, Crime Stoppers is a community program supported by the Brandon Chamber of Commerce. The Brandon Crime Stoppers Board of Directors is formed from volunteer representatives from various businesses, agencies, and media throughout the city. It is this Board that runs the Crime Stoppers program. This group also promotes Crime Stoppers and comes up with ideas for fundraising and policies of Crime Stoppers. Additionally, these people assist in the city delivering posters, pamphlets, and giving talks when the Police Coordinator is unable to attend. The Board of Directors is involved in getting smaller support groups organized in the city to aid in promoting the program, and to assist in fundraising. Bail-A-Thon is organized by Board Members and has proven very successful in past years, bringing in as much as $38,000 in funds to Crime Stoppers. The funds that are raised go towards printing posters, pamphlets, cards, Crime Stoppers pins and caps. Most importantly, the funds raised are used for the payment of cash awards.

Currently, CKX TV of Brandon produces Crime Stoppers TV Specials. Crime Stoppers requires the support of all media for the publication and airing of our re-enactments. Brandon radio stations include: 94.7 Star FM, KX-96, 101 The Farm, 1220 CJRB  and 880 CKLQ. These stations air on a weekly basis one unsolved crime up to 6 times per day. If the crime is solved, or the week has expired, a new crime is aired.

Without the Media, the Community, and the Police working together, Crime Stoppers could not Function.